This is a code word that Chris and I stole from the movie, “Meet the Fockers”. Dina Burns would say “Muskrat” to Jack Burns if he’s being a dick to Gaylord Focker. “Muskrat Jack” says Dina. Then, Jack Burns would have to get his shit under control and mind his manners. Chris and I say this word, “Muskrat”, if either of us are drinking to much. Fucking “muskrat” would be muttered if one of us were slurring our words, offending people, taking numerous shots, etc…

This word was formed after my behavior one night.

We had our second kid and I couldn’t wait to get back on the band wagon. I had missed 9 months of fun, driving around drunk people all night, and staying up listening to family and friends drunk talk for hours. It was my turn…. Now, after having a baby…I was such a fucking light weight….and didn’t care.

There was a cocktail hour with barely any food. You can see where the disaster is already starting. Who needs fucking food anyways? Food is for losers and I’m a supermodel. I chugged a few glasses of red wine…so fucking good. Chris mingled with people, I just kept ordering wine in my slutty dress. Cocktail hour was almost over and my feet were killing me. My heels were way to high for me. Why don’t I just buy naturalizer’s already? How about another glass of wine to make the pain go away? Finally, ugh…we get to sit down and watch the Fashion Show. Sitting there drinking and watching models work the runway. All the name brands of shit I will never fucking afford. Here come the fur coats, those are pretty…wonder how much those are? Maybe I could get one after the show?

The show comes to an end. I stood up and my legs were useless. Chris hurried and shuffled me to a table. I was fucking drunk. He didn’t want to be rude to the people he was talking to earlier. I had to compose myself and act like I was not drunk. My pupils were out of fucking control with half slit eyes, I was fucking hammered. Chris was done talking and helped me out the door.

For some reason, I got in the back seat of the car. Chris was so confused and didn’t know what I was doing. In my mind, it made perfect fucking sense. I wanted to be chauffeured home in between two car seats. He started driving and every turn was knocking me on my ass. I kept asking him why were going the wrong way. He definitely was driving the right way. I’m so fucking blacked out in the back…this drive home made no sense. I kept arguing with him, poor guy. I think I even passed out for a little awhile and woke back up. Were almost home and he pulls into a McDonalds, because he wanted me to eat some food. I suddenly had the urge to throw up. We were in a parking spot and I was screaming to roll the window down. Panicked I would throw up in the car. I leapt over one of the car seats and the car window only went down half way. DAMNIT! I fucking barfed inside and outside of the car. At the same time, I was fucking blowing the biggest farts. Thank god those weren’t sharts, could you imagine that mess? My slutty dress was up around my waist. Chris could not believe what was happening and it was a scene straight out of bridesmaids. “Look Away! LOOK AWAY! STOP LOOKING AT ME!” Gross, Chris had to go into McDonalds to get some napkins to clean this shit up.

I had a few other nights like this. “Muskrat” was introduced and is a word that brings Chris and I’s marriage together.

Pastor: “We are gathered here together to unite these two “Muskrats” in holy matrimony. Do you take this Muskrat to be your lawfully wedded wife? 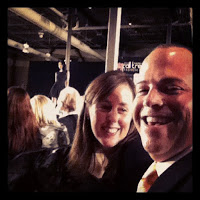